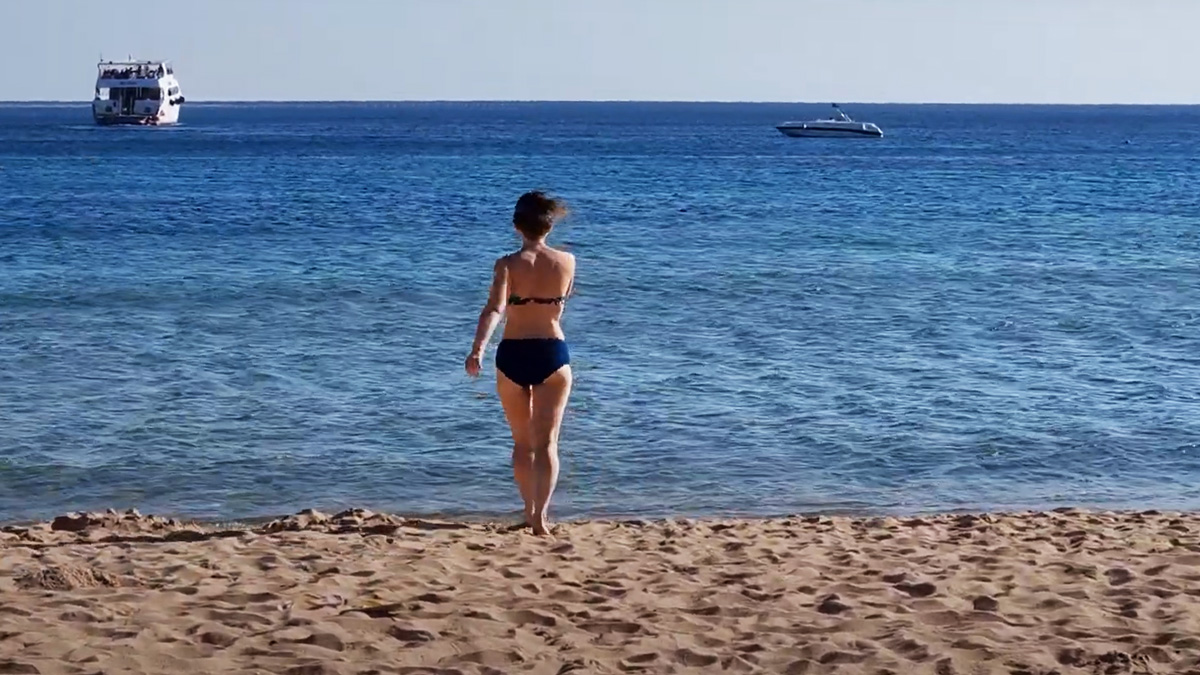 Sun, sea, beach, sand. The long-awaited freedom begins to be felt already at the airport. What is freedom? This is flight, delicious food, fun adventures, love. And when you go on vacation “with your suitcase”, “with your samovar” or just with your husband, who is of course the best, but you’ve been together for 16 years and should have gotten tired of each other by now; but by a strange chance you didn’t get tired, I think because some men really get prettier with age, at least mine … – in this case, the holiday lovestory turns into a funny story, which I will tell you now.

So. We arrived in Egypt, checked into a hotel, and the first thing we did was go… no, not to the sea, but to a restaurant. Everything is included here, and we were hungry not only for warm days, but also for food, which – wow! – no need to buy and cook, for crumbs that you should not collect from the floor, for dishes that someone washes for you. As our guide said: “here a person either eats or sleeps”, including the beach and other places to relax. We occupied the most romantic table, with a rose in a miniature vase and cutlery packed in a disposable plastic bag (these are anti-Covid measures).

While the Bear was looking for goodies, I looked around – many vacationers in summer clothes with overflowing plates of fragrant food dazzled like outlandish multi-colored butterflies, and among them one young man with a dark beard, who from afar quite strongly resembled my husband in appearance, only a bit lower, more tanned and darker-haired. And the facial features and figure are exactly the same. “Do I really have a special taste in men?” – I thought, carefully examining the handsome man, who was eating a mountain of biscuit sweets.

Apparently, I’m not very good at hiding my curiosity, as the Bear says about me: “well, you’re revealer,” since I usually look at what interested me in the forehead, although this is probably considered impolite. Pretty soon, “Mr. Orange Trunks” noticed my look and began to glance at me in return. In less than a couple of minutes, stable eye contact was established, and I myself was surprised at how quickly it happened. “I haven’t had time to go to the beach yet, but I have already found a boyfriend,” I would say to my friend if we went on vacation with her. But then a woman with a child sat down by my orange swimming trunks, and the Bear sat opposite me with a full plate of food.

Bear and I tell each other everything, and on vacation this everything usually comes down to what guys and girls are the cutest here, what figures and asses they have, whether they have husbands / wives / children and stuff like that. What else to talk about when tanned people in swimsuits walk around? You begin to envy someone, you begin to be interested in someone, you catch other people’s conversations out of the corner of your ear, and you also consistently yearn for the past, when everything was so young and green and the future seemed as bright and cloudless as the blue sky over the Red Sea in Egypt.

When I read stories about other people’s holiday romances, everything develops quite straightforwardly there: they met eyes, talked, drank, spent the “night”, the next morning they scattered in all directions. And I still find it difficult to understand this plot, perhaps because I am an introvert? Or too boring and notorious? Coward? Or maybe I just love my husband and am not particularly interested in “real life” holiday romances, although reading about them can be quite fun. Moralist? Well dunno. So, my holiday romance developed rather unexpectedly.

We came to the beach, the Bear went for a swim, I stayed with our suff and the book “Black Spear” by Perumov. At 7:30 in the morning, besides us, only a couple of people sleepily stretch on sunbeds, a lifeguard slowly climbs into an observation booth and five Egyptian herons imposingly walk along the water’s edge, looking for a negligent fish for breakfast. These herons are smaller than I’m used to seeing in pictures – up to my knee, and more hairy with disheveled hair on their heads; two pearl white and one ash grey. In the sea, somewhere far from the shore, only one person swims, it was the Bear.

I read so deep that I didn’t notice how 40 minutes flew by, and then I see a wet bearish lump in light green swimming trunks running towards me along the sand, waving its paw, happy as an elephant. I was provided with detailed information about the location of coral reefs and large species of marine life, he showed me the best entry and sent me on a long sea voyage. “And the breeze is cool in February!” – I thought, shivering standing in a bathing suit on the still empty beach. And slowly went to see some water, shrinked to warm up a little.

I padded over the next empty sunbed with an umbrella and side wind protection, and then I literally come face to face with the same guy from the restaurant, and he is still in the same orange swimming trunks, which in a more formal atmosphere can be called shorts. He sits down on a sunbed in a lotus position and sips a colored cocktail through a straw, I hope it is non-alcoholic. I look at him, he at me, maybe a little longer than it is normal for strangers. I immediately straightened up, like I wasn’t cold at all, and went “from the hip” to the sea as gracefully as possible with my nose up to the sun.

I walk and think: “100% he is staring at my ass!”, I turn around – and he is looking; and happy me continue to move on. I already imagined a picture: “now I’ll go into the sea like a sea queen, dive with a swing into the abyss of coral and swim beautifully like a frog, dissolving the rings of salty waves”, but then my foot was covered to the toes by tidal water and my enchanting fantasies crumbled in an instant – the water is fucking cold, although it is written that it is 23 degrees; coupled with the cool wind and the general emptiness of the beach, I completely didn’t want to go swimming.

After a little hesitation, I glanced back with naive hope – but now not only the “orange” one (damn him!), but also my Bear, who managed to wrap himself in a warm yellow-white terry towel, looked at me from there with interest. My body began to treacherously goosebumps and tremble, but as you understand, I had nowhere to retreat. Deep breath, back straight, one-two-three, running! Plop. Fuuuuh… After a couple of seconds, I warmed up in the water, after all, this Red Sea is cool! And I began to move away from the coast towards the coral reefs, quite pleased with myself.

In films, it looks super beautiful when one single main character swims somewhere towards the horizon, and around there is only dark blue water and light blue sky. But in reality, it’s downright pissing, you’re swimming somewhere far away, below it’s already deep and corals are growing, ripples in the water from a fairly strong wind, you look under the water (we took diving glasses with us) – there are flocks of huge multi-colored fish; and around you in the sea you can not see a soul. Maybe someone likes this, but I was notably frightened. But what to do, I came to the Red sea – swim and have fun, especially since I need to show “class” to my three coastal admirers (I also signed up a lifeguard in this company).

I swim back and see another head in the water, well, I think, thank God, people began to appear. I’m in swimming goggles, that head is in a mask and snorkel. We caught up and the head suddenly says to me: “Good morning!”, I say with surprise: “Hello!” Still, it’s pretty freaky to say hello to each other at depth in the water, don’t you think? I have been going to the sea all my life since childhood, and before that I had never greeted a stranger while swimming. On the other hand, when it’s just the two of you swimming on the whole huge beach, then such politeness takes on some meaning.

Swimming to the shore, I began to look out for the audience of my imminent exit from the water – are they all ready to see a girl of unearthly beauty in a wet bathing suit? Lifeguard in the booth, Bear in place. So stop! And where…? I turned around and almost jumped in surprise: about five meters away from me, the same “Mr. Orange” was swimming. So did he say hello to me? Wow! I didn’t recognize him in the mask. That is, we have already moved to the stage of “talking”?! Everything began to develop too quickly . And I just wanted to take it easy under the admiring glances. OK.

At dinner, my holiday romance reached its climax at the cake stand, when I stood in thought – to take a white cake or brown – from behind a loud male voice cheerfully said: “Ladies, what sweets would you recommend taking?”, I pointed to the most delicious compartment with biscuits and businesslike answered: “These one!” And when I turned around to find out what kind of ladies were around, I saw too close only that smiling man who still seemed extremely attractive to me, but already noticeably less than when I could observe him at some distance and we had not yet been talking.

Returning to our table with a pile of sweets, I was forced to admit: “In a holiday lovestory, the moment of _eye-to-eye_ is much more interesting for me than anything else.” Fantasy, anticipation, curiosity, hunting. I usually “hunt” with a look. Yes, and I also often communicate with glances. There is some kind of fun game in this, hints, flirting, a clue. And when someone approaches me even at the level of “hello”, then I’m like “woo-woo, take it easy, why so close.” Why inflate the fog and get out of the illusion: you need to wipe the misted glass if you are going to leave.

This entry was posted in Blog. Bookmark the permalink.