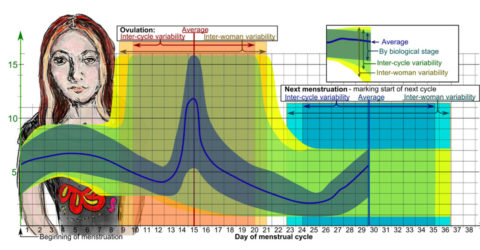 An irregular cycle (irregular menstrual cycle, menstrual irregularities) is a cycle in which the average length of periods is disrupted. Normally, from the first day of menstruation to the first day of the next menstruation about 28 (+/- 7) days pass. The duration of menstrual bleeding should be 2-5 (sometimes up to 7 days). Accordingly, if a woman has stable deviations from these norms, then we can talk about an irregular cycle.

What to do if menstruation goes irregularly?

Usually, doctors and their patients have no questions about the duration of the cycle from 21 to 35 days. In rare cases, it can be longer or shorter due to the individual characteristics of the woman. As the doctors say, if you are under 16 years old, then it is likely that the cycle is still just in the process of becoming stable and it will settle down later. In my case, by the age of 27, it did not become regular. After long clarifications and analysis, I found out that I am completely healthy, and the reasons for the irregular cycle may be my special physiological processes, heredity, rhythm of life etc. So there is no need to look for the reasons; you just need to figure out how to live a life with an irregular cycle.

I think that for any questions regarding women’s health it is worth contacting a doctor, as well as on the topic of irregular periods. If you are about 18 years old and the cycle is still irregular, then this is a good reason to visit the gynecologist once more and ask him these questions. When I came to the doctor with a question about irregular periods, I was tested — smears, hormones, sent for an ultrasound. According to the results of the analyzes, nothing was especially found, except that I had testosterone close to the upper limit of the norm. Everything else was in perfect order with me, and there were no apparent reasons for the cycle deviation.

I was offered to drink hormonal contraceptive pills (oral contraceptives or OC) to lower testosterone and increase female hormones. I was also told that if you cancel OC, it will be much easier to get pregnant. But I was not going to do anything like this, and I did not begin to take hormones either. It seems to me that the human hormonal system is too complex to try to regulate it with pills, especially if there is no real need for this. Even my testosterone was normal, well, along the upper limit, but within the normal range.

On the one hand, an irregular cycle does not particularly interfere with life, but there are some difficulties. Most people’s menstrual cycle is established during teen-age period and by the age of 18 become to normal. Monthly periods always begin at about the same time, they can be predicted, and you can use them to focus on the topic of intimate relationships — when are safer days and when ovulation occurs. If, like me, your periods come when they want, then you live all the time like on a volcano. You are not aware when will the next menstruation begin. You have to be on the alert all the time.

And yet you cannot understand why your period does not start — because of the nature of the cycle or because you became pregnant. After all, most girls are guided by their menstruation in this matter, and if they have a delay in menstruation, then this is an occasion to do a pregnancy test and consult a doctor. If you want to make a baby, then irregular periods will also do you a disservice, it will be difficult for you to calculate the day of ovulation — the best time to conceive. Thus, if you have a delay in your period, then it’s worth figuring out — you should run for a pregnancy test or go to the doctor and study your cycle. Perhaps you also have an irregular cycle?

I got a boyfriend at 19 years old, we started a stable intimate relationship. Before I found out that I have an irregular menstrual cycle, I bought pregnancy tests every month and worried. It seemed to me that menstruation should go today, because a month has passed already. But menstruation did not begin. I counted the days … the delay is 1 day, two days, three days. And every time I did not know exactly what to do. I spent a lot of money on pregnancy tests and doctor visits, analysis. All the time, it seemed to me that I needed to pass one more kind of analysis and they would tell me what the problem was. But this never happened. Sometimes I had a complete cycle missing, that is, the periods ended, and the next began only after two months. Sometimes the delay was several weeks.

As long as you don’t know the reason, pregnancy and illness should be researched. And if you are not pregnant and generally healthy, it turns out that you have an irregular menstrual cycle. The degree of its irregularity may vary for everyone, I have encountered both single deviations from the cycle for a couple of days, and delays for a couple of weeks or more. And even whole cycles fell out — for two consecutive months there could be no periods. What could be the reasons for the irregular cycle? I think there are two main reasons:

There is probably a certain genetic predisposition to the irregular cycle. This cannot be influenced. But there is another side to the coin. Now I think that my irregular cycle had a simpler explanation — stress. I studied at Moscow State University, worked, then went to postgraduate school and to the second master’s programme, I had a lot of stress in my life. Day after day, stress affected my health. I think that the irregular cycle was a reflection of exams, sessions, difficult moments. The effect of stress on the hormonal system is not so fatal that a specific disease develops. After all, the “irregular cycle” itself is not a disease. But still this influence was real, and my periods disappeared just during the session, exams, moving to new flat, fight and so on.

Surprisingly, as soon as I began to pursue a healthier and more relaxed lifestyle — working from home, getting enough sleep, eating a lot of vegetables, fruits and berries, walking for an hour every day — all this led to the fact that I became not only less likely to get sick with a seasonal cold but my periods have also improved. The last couple of years, menstruation comes like a clock. The cycle length is an average of 30-31 days. Almost always, menstruation began on the same day. Sometimes there is a shift of 4 days. But the full cycle did not fall out in about 6 years. Just after I finished my education, defended my PhD thesis and quit my job. My new way of living and the absence of additional stress have a beneficial effect on my periods!